Neinor Homes doubles its land bank with the acquisition of 10,000 units and an investment of 600 million euros 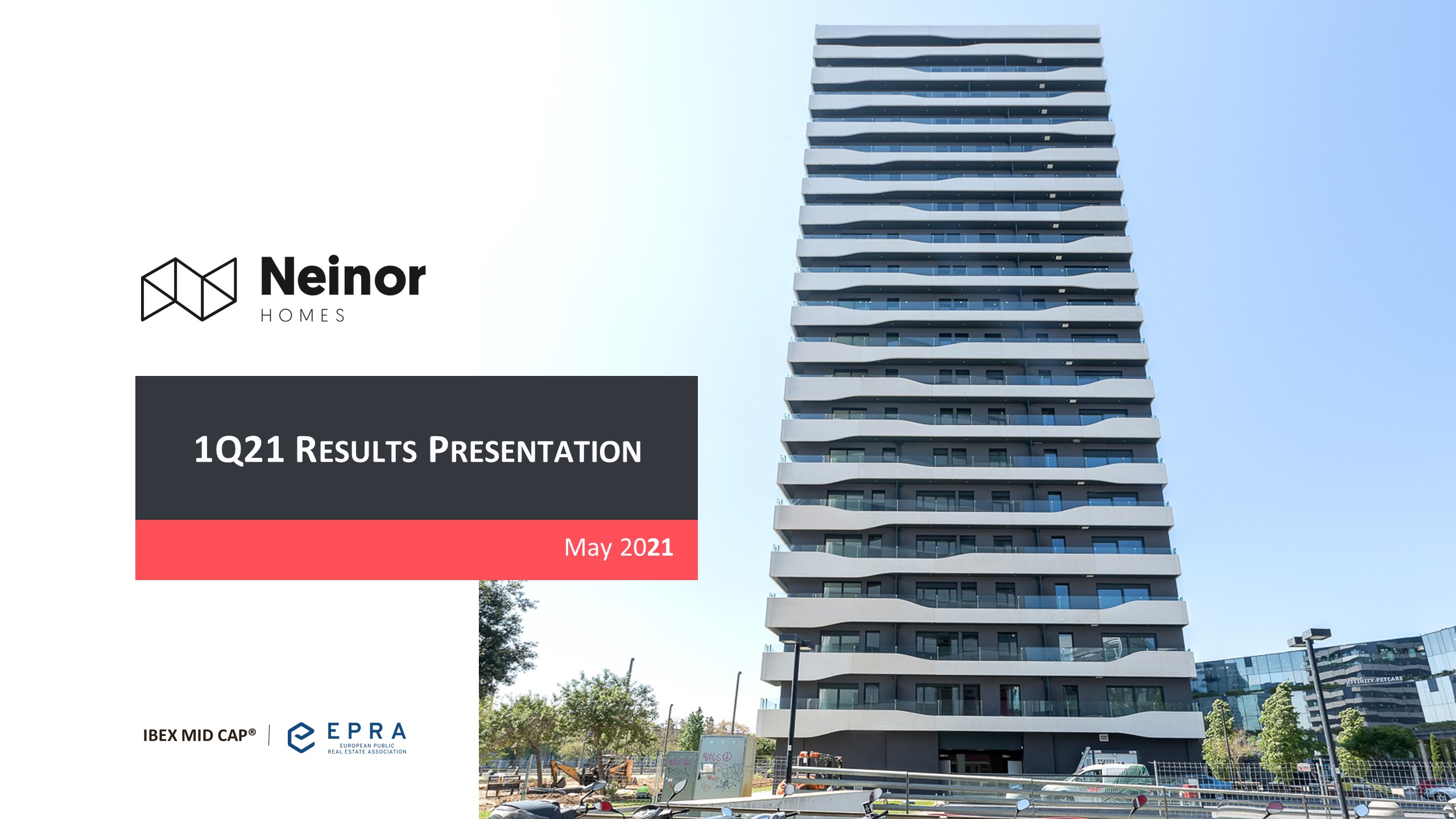 Madrid, 14th of May 2021.- Neinor Homes, Spain’s leading developer, has closed a record first quarter, doubling the main financial figures and its land bank. In the period, the Group highlights the acquisition of c2,500 new units, of which nearly 89% are located in prime areas of Madrid and Barcelona. These additions, together with the acquisition of Quabit that brings another +7,000 units, entail an investment of nearly 600 million euros and allow the company to add c10,000 new units to its actual land bank, doubling its capacity vs the end of 2020.

Regarding the financial results, the company has obtained an Attributable Net Income of 10.2 million euros (+160% vs. 1Q20) and an Adjusted EBITDA of 18 million (+95%) during the first three months of 2021. Its Revenues stood at 103 million euros (+103% vs the same period of 2020), of which 95 million originate from the Development business, nearly 6 million come from Servicing activities and Renta Garantizada, 0.5 million from the Rental platform and 1.2 million from Legacy. The Group’s gross margin stands at 30%.

The figures for the first quarter of 2021 have surpassed the ones achieved during the same period of last year. Looking at the business’ evolution, the outlook for the year is very positive and Neinor Homes reaffirms its ability to fulfil the business plan objectives, with an EBITDA of 150 million euros, which would entail a 36% growth vs the 110 million achieved in 2020.

Positive perspective for the year 2021

The company has also delivered 345 units during the quarter, a 10% increase vs the same period of 2020. For the upcoming months, Neinor Homes is expecting an intensification in deliveries, starting in the second quarter of 2021, in line with its business objectives.

Regarding the Neinor Rental platform, the company has a landbank of nearly 3,500 units, of which 391 are already operating (for the end of 2021, the expected figures are 550 operating units and 1,000 units under construction). In relation to Renta Garantizada, the company acquired during the last quarter of 2020, it now has 2,500 units under management. The experience and trajectory of the company will allow to manage and seize business value and growth possibilities.

Neinor Homes has invested 89 million euros in CAPEX during the first quarter of 2021. The group has finished the period with and Adjusted Net Debt of 270.5 million euros (a -9% vs 1Q 2020), with a LTV of 16% (2 percentage points less than last year). This implies a low level of leverage, in line with the prudence of the company.

Another highlight has been the Company’s first bond issuance at the end of April, achieving its objective of 300 million euros, with a 5.5-year maturity and at a 4.5% cost. The total demand amounted 1,500 million – a 5x oversubscription – which puts the company at a comfortable financial position with no relevant corporate maturities in the upcoming years.

Given the solid cash position (191.6 million euros) together with the opportunities of the market, Neinor Homes has all the necessary tools to develop its business plan optimally.

Borja García-Egotxeaga, CEO of Neinor Homes, states: “The company has closed a solid first quarter, following the strategy designed to achieve our objectives. The period has been marked by the announcement of the merger by absorption of Quabit, which adds and strengthens our exposure in high growth areas. Furthermore, we have increased our landbank with acquisitions that put us in a comfortable position to tackle the upcoming years. Our Neinor Rental division keeps achieving its business plani as expected. All this reaffirms that the group is moving in the correct direction, as evidenced by the results obtained during the first three months of the year, with the final goal being generating value for our shareholders”.

Jordi Argemí, Deputy CEO and CFO of Neinor Homes, adds: “During the quarter we have demonstrated an unprecedented execution capacity, where in addition to doubling our financial operating results, we have also been able to i) invest around 600 million euros in land, doubling our landbank ii) leading and pioneering the consolidation the developer sector and iii) issue a 300 million euros bond with an oversubscription of 5 times”.